This is a great space for an announcement or special offer.
You are here: Home / Creative Life / Book vs. Movie Comparison of Aragorn from The Lord of The Rings

A favorite learning technique for learning how to write character, dialogue, or description, is analyzing books and works that did it well. One of my personal favorite books to analyze is The Lord Of The Rings by J. R. R. Tolkien. Now, trying to analyze the entire Lord of the Rings trilogy would be impossible if one were doing it all at once, or even broken up over a month, or six. However, taking sections or characters and just analyzing them is a good way to hone one’s craft.

Since I write fantasy, Tolkien’s work is a good choice to analyze since he was one of the writers who began the high fantasy genre. While much in the genre has become cliched and expected, when Tolkien wrote it was still unusual and, well, novel. Epic quests, elves, and orks and goblins are now mainstream in fantasy but once upon a time, they were not. The one thing that never seems to change, no matter the genre, is the importance of characterization and character portrayal.

For this analysis, I’m taking on one of my favorite characters, Aragorn. With any book you can analyze the characters, but with a book that is made into a movie you have two choices. You can either analyze the book character, or compare the book and movie characters. Both of which are good choices for learning how to craft good written characters. What in a book, or movie, makes the character seem a certain way, and how does that impact the reader? 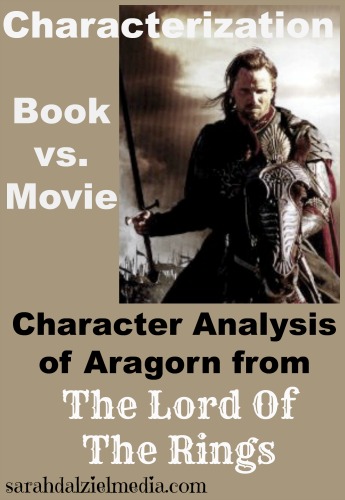 In general, Aragorn is portrayed as a very capable warrior, and moderately capable leader. His leadership is only moderate in the book, because he is unsure of his own abilities, his friends have zero doubts about his leading. In the book, his words show he is a man of action and decision, who has no hesitation in doing what he is called to do.

The first time Aragorn meets Frodo, he declares himself as Isildurs’ heir and the bearer of the sword that was broken. Within the pages of the Lord of the Rings, Aragorn demonstrates an unflinching will, and the determination to fulfill his word no matter the cost. The enemies of Aragorn are extrinsic in the book, Sauron,  the wild, and the battles.

This is not the case with how Aragorn is portrayed in the movies. Within the movies he waffles, hesitates, and shrinks back from the goal. He even hesitates in his love of Arwen in the movie. While this gains attention, portraying a struggle on the screen. Aragorn’s biggest challenge is not the Enemy, or the things he must fulfill. Instead Aragorn is his own enemy.

The biggest difference between Aragorn’s character in the book vs. the movie is his level of decision and determination. The type of character Aragorn is, is clear from the first introduction when he meets Frodo. But, there are some clear differences with that scene when comparing the book to the movie.

In the book, Aragorn begins by trying to convince the hobbits that he is trustworthy, at the same time as testing them to make sure they are not a trap. After Gandalf’s letter is revealed, Aragorn declares who he is and, to answer Samwise’s doubts, he draws his sword. On the drawing of the broken sword, he also declares that the “time is near when it shall be forged anew.”

This “Prancing Pony” scene in The Fellowship of The Ring demonstrates where Aragorn’s mindset is, and that he is prepared for what will happen. Already, in his first appearance, he declares his ancestry and the soon-to-be realized fulfillment of hope.

Compare the book realization with the portrayal in the movie. Our first glimpse of Aragorn is of a man, hooded and cloaked in the darkest corner of the room. Then, he grabs Frodo and drags him into another room. Finally, he offers to lead them, but as Strider not as Aragorn.

While he is calm and collected, there is no strong feeling of purpose or destiny portrayed in this first glimpse of Aragorn. Instead the very first glimpse is more of a veiled caution, is he friend or foe and what does he stand for?

In a movie or book, portrayal is everything. While either a book or movie can focus on the main storyline, the way a character is portrayed will either increase or decrease the reader’s interest. In the book, Aragorn’s first portrayal is as a strong character who is a contrast to the hobbit’s unskilled and weak appearance, and later a foil for Boromir’s waffling.

In the Lord of The Rings movies, Aragorn alternates between appearing unsure and hesitant to being decisive and living up to his words. With this portrayal technique the watcher is pulled into wondering if things will actually work how the book had them work, will Aragorn actually succeed and marry Arwen or is he being pulled from his course by Eowen? While a more dramatic portrayal, it has the potential of leaving Aragorn’s character appearing weak and unworthy.