This is a great space for an announcement or special offer.
You are here: Home / Writing Behind The Scenes / Book Reviews / Dear Mister Essay Writer Guy Book Review

First off, while it is not exactly clear from the title or description, “Dear Mister Essay Writer Guy” by Dinty W. Moore is a humor book not a writing book. Though, for a writer, it does show that some of the weirdest and most mundane ideas can be twisted into some semblance of humor.

While most of the book had some level of interest, there were several of the “Essays” that were uninteresting to me. This is possibly due to a difference in my sense of humor as compared to the sense of humor of the author of this book. 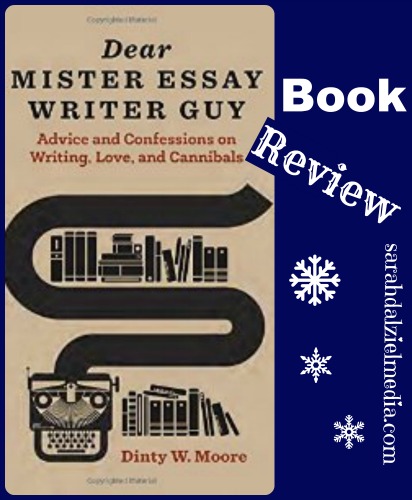 Each of the chapters in this book is composed of a question, and something somewhat resembling an essay. Most of the humor is found in the question and immediate response to it rather than in the essay, which is unfortunate. However, I did find the essay written on cocktail napkins to be quite fascinating, as well as the idea that writers who write drunk can end up with weirdly humorous work.

It is a very short read, thanks in a large part to the layout and relative skim-ability of several of the essays. Due to the content it is also a very light read, and would be suitable for browsing when one was expecting to be interrupted, or for a time when you do not want to be involved in anything heavier. This book would possibly be perfect for reading when in a waiting room, or airport, and while a hard-back book it is also light enough not to take up valuable weight restrictions when traveling either.

If you like having a smile or chuckle at writers and aspects of writing, you may enjoy this book. However, if you are a more serious writer, you may find it more annoying than enjoyable. While I enjoy humor as much as anyone, I have always found I have a strange sense of humor and often find annoying what other people find humorous. But, obviously, that is me and is no fault of the book.

I mentioned before that it is a light and fast read, and indeed I read the entirety of the book on a lunch break. And while the soup did end up getting a little chilly before I was done the book, it really didn’t take that long to read. While it is not a book I would read again, I have no regrets for having read it once. Though, I may try to find another National Novel Writing Month (NaNoWriMo) participant to give it to.

If I were to rate this book on a star system, I would give it 4/5 stars. Since it is well written, and was quick to read. The one star off is due to some of the more off-putting humor in some of the essays, which is less a reflection on the book than on me, as the reader, for not enjoying it.

Do you enjoy humor books, whether on writing or not? If so, leave a comment and let me know what your favorite humor book is!

Note: This book was received from Blogging for Books for the purpose of this review. I was in no way obligated to give a positive recommendation for this book.

Previous Post: « Debt Free University to Ministry: How Your Values and Philosophy of Learning Impact Your Actions
Next Post: 10 Extra Special Gifts from Writers for Their Family »