This is a great space for an announcement or special offer.
You are here: Home / Living Life to The Full / Ministry / Debt Free University to Ministry Part Nine: Raising support for volunteer missions

Most international ministries are forced to rely on international volunteers. Often this is due to the not-for-profit regulations in their country, many of which state that a not-for-profit can only employ nationals. At other times, it is simply the case of Christian ministry that it is at least partially volunteer, or self-supporting.

When thinking of this, two words make me cringe, “support” and “raise.” I dislike asking for money, prayer support I will ask for, but monetary support always feels far more awkward. Of course, whether one is going on short term or long term missions, money is always needed and must nearly always be raised.

My one 3 month adventure only needed 1/5th of the support to be raised, as the other money all came from my own pocket. One of the reasons I am very glad to be among the ranks of the Debt-Free university graduates. However, for longer ministry purposes, more support would necessarily need to be raised.

This method is, of the asking methods, probably the least threatening one. For this method, one must raise support among those one knows, or small groups that one is slightly affiliated with. This can include small group studies, or just groups of friends banding together to help in your support. Speaking to these, non-threatening groups, can also help one get over the slightly more threatening aspect of talking to larger groups or churches.

Most of a volunteer’s support will have to come from private sources. It is individuals who will pledge to help you on a monthly, quarterly, or yearly bases. Some will only be able to give a one-time gift, but even that can be very helpful.

Usually with short-term missions, it is small individual one-time gifts that are the enablers. With long term missions it is a monthly, quarterly, or yearly pledge that is most sought after. Of course, depending on how many friends, relations, or other private individuals you know who could support you, it may be easy to get a large number of small pledges, rather than a smaller number of large ones. A hundred people who pledge ten dollars a month, and fulfill it, is better than ten people pledging a hundred and stopping after three months.

Remember, support is a partnership and someone who is enabling you to minister to others is also partnering with you in that ministry. It is a gift to them to help you, even if looking at it that way is strange.

For my own satisfaction I like raising some of my own support by my own efforts. Perhaps it is the latent entrepreneur in me, but with the web at my fingertips it is hard if I can’t bring in something every month.

If you are doing short-term missions, your personal level of support may mean a full-time job from which you take vacations to do missions. Alternatively it could be an online job, which you can carry with you and that does not take a huge amount of your time each month.

For myself, I have the larger challenge of not liking to feel the larger stewardship burden that having all my support from others entails. I am a descendant of Scots, and was raised to be very aware of where my money was going. While I like being careful with my own funds, it becomes far harder with donated support. I want to be a wise steward, and as a result I end up over-thinking everything. Of course having some level of personal support means that I can draw from that, at least mentally, when I want to do something extra, or just for fun. With the internet, there is a wide world of possibilities for being self-supporting, which will be covered later. 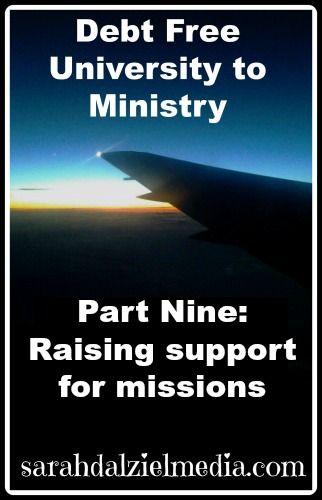 Another way to get “around” the support issue, is to do something a little bit different. It is called “Business as Missions” where your business becomes not only your support, but also your main vehicle for mission actions. Whether that is because one is using it to support humanitarian action, or simply to become friends with those in the country, business can be very effective.

The largest base of your ministry support will likely come from your local church, or a network of local churches. Most churches have some level of budget for missions, and may well be willing to help a local person with consistent support. Other churches may not have the budget, but may have people who want to give through the church.

Every church is different with how they provide support to their missionaries. Some require letters, to be considered at the mission’s committee budget meeting. Others may do it spontaneously, or in other ways. However, all of them require some level of speaking or writing to communicate.

Prayer is the single most valuable resource you can have, and the more dedicated prayer warriors on your side the better. This is one region where I am unashamed to ask, frequently and often, for more support. Prayer changes things, moves things, and makes what seems humanly impossible into the more than possible. While I may shirk asking for money, I never shirk asking for prayer.

If I knew that I had 100 prayer warriors at my back, I would fear nothing. No matter where my ministry call lead me, even if it was into the middle of a war zone. The safest place to be is exactly where God wants you, with prayer support at your back.

Some ways that I have frequently seen youth groups and individuals recruit funds for short-term missions, is through short-term events. Bottle drives, bake sales, and silent auctions being the most frequent around where I’m from.

These options are good if you have just a bit of short-fall, and the need is only short term. Unfortunately, unless you’re planning on saving for several years before starting ministry, it won’t get you far long-term. However, if you do have long-term support in place, these options are good for things like plane fare, or other one-time expenses as the expense is known, and the drive can be focused on it.

In fact, for my long-term missions it is actually the plane fare that will be the biggest challenge. While each month’s expenses are not far over 1000 dollars, the plane fare alone will be well around 2000 for a one-way trip. Fully equal to two regular months of expenses, and if you have a flight a year it can get awkward quick. Even if it’s only out one year, and back the other, it will still be equivalent to 4 months normal expenses – talk about awkward!

A blend of support techniques is probably going to give you the most secure network. However, each person must choose how they approach ministry. Some may be fully funded by their church, others may need to go to many churches to build enough of a support network.

In reality, while I have observed many ministries recruiting support, I only have my own practical experience to draw on. That experience has shown me that confident speaking, good writing, and unflinching commitment to your call are all good things to have before starting out. Confident speaking can be cultivated, although some speaking confidence is helpful for someone just starting out.

Personally, even though I enjoy speaking at churches, I would rather only need to ask for prayer support. Thanks to the online world, there are greater opportunities than ever before for being self-supporting, whether in ministry or not, or deliberately doing business as missions.

What methods have you used to raise support?