This is a great space for an announcement or special offer.
You are here: Home / Living Life to The Full / Ministry / Five Lessons Learned From My First Year of Full-Time Writing

Last January, I looked behind at four years of university and held in my hand my finished BSc degree. Looking ahead, I was unsure of what the year would hold but knew I would be writing, somehow. Little did I know exactly how much I would end up writing… It may have only been a year ago that I was a university student, with papers due and exams to worry about. But it seems like it was longer ago than that.

Even in just one year of full-time writing, I can see a huge improvement in style, content, and direction, as well as in speed, and consistency of writing. November was my best month for writing, due to NaNoWriMo as I have mentioned before. I tracked all my writing in November, and wrote over 100,000 words in that month alone, on the novel and on non-fiction works. 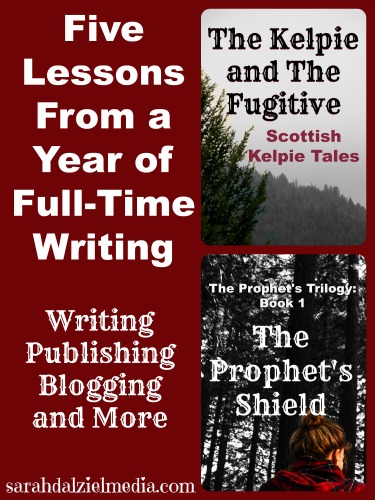 Works In One Year:

In this year of writing I have ghostwritten articles, short stories, and informative pieces for more than 50 clients and have beta-read or proof-read more than 50 full length works.

I published my first full length fantasy novel “The Prophet’s Shield” and a novelette “The Kelpie and the Fugitive.”

I wrote 5 other short stories, and the majority of 2 other full length novels (The Prophet’s Fire, and The Prophet’s Recompense). The two novels will be published in the first half of the coming year.

And, on top of it all, I wrote full-time for 2.5 months as a volunteer in Jerusalem.

Lesson One from A Year of Writing:

Consistency is essential. Developing a craft requires, and craves, practice. I would not be where I am now in my writing skill, if I had not had this year of practice. I still struggle with consistency. The blogging helps me make sure that I am writing something every day, but it is the fantasy writing that is really what I long to focus on.

Just since October I have actually been blogging on a consistent schedule, three articles per week, on Sunday, Tuesday, and Thursday. The articles are of a fairly consistent length, always over 500 words. No complaints so far.

November was my most productive month, and the most awesome month of the year. Why? Because I wrote daily, not desultory writing of a few hundred words, but thousands of words a day. My lowest day was around 4000 words! But, all that fantasy writing had a price. I burned out, and have not touched my novels for the entire month of December. I have been editing my fantasy writing, but I had no mental energy for creating fresh scenes.

Whether you are a writer, musician, or artist in another medium, practice is essential and the more frequent the better. Daily practice, even just 15 minutes or a few hundred words, is key to honing and improving your craft. While I may regret pushing myself to extremes, I don’t regret the daily writing and the steady growth of my manuscripts.

Lesson Two from a Year of Writing:

Ideas are the hardest part. This is why I love ghostwriting, because someone else gives me the idea and all I have to do is write a story that works with it. On the average blog post, this one included, at least one quarter of the time spent to create the post is expended in thinking up the subject. Ideas are hard!

Notebooks, snipe files, and brainstorming sessions are the writer’s friend. Snippets of conversation, noted down in a notebook can provide hours of creative “idea-tainment.” A few sentences pulled from another novel, either description or action, can provide a jumping off point for a fresh work. While brainstorms are awesome for connecting random ideas, building off of side-thoughts, and generally generating a wealth of topics and ideas for later writing.

This is another reason that I like story-starters, or writing prompts. It provides the jumping off point, the not-so-blank page to start a story. And, sometimes, I just like writing my own prompts too.

Lesson Three from a Year of Writing:

The internal editor is your friend. Um, really? I thought we were supposed to turn off the inner editor during first draft stage… Not really, unless you are trying to write like crazy or have a really nasty version of the internal editor. I find trying to avoid editing makes me write slower and with greater care, whereas if I let myself edit as I write, I have fewer worries and less to fix later.

I am a touch typist, and just for fun I decided to do a self-monitored test of my writing speed. So, taking a short story I was working on, I noted down the starting word-count and the time. Then I wrote for five minutes and noted the word-count. I repeated the timed measurement for intervals of ten, fifteen, twenty, twenty five, and thirty minutes. I found that my best word-per-minute ratio happened between the fifteen and twenty five minute marks, with a rate of 57-59 words per minute.

Now, this little experiment was done with a word-in-progress, The Kelpie and the Fugitive actually. It was creative and organic writing, not just typing. I was editing while I was writing, often erasing several words or lines and re-writing them during the trial. But, I still had a very good writing rate, despite indulging my inner editor!

Lesson Four from a Year of Writing:

Not everyone has the same skill, or the same expectations. When I was in Jerusalem, I found that most of my coworkers considered me to be an exceptionally fast writer, and reader. Now, while I have worked to develop my typing and writing skills, I would not say that I was any faster than someone who was average with their skill. I will admit that I am a fast reader however, because I have developed that skill very deliberately.

Now, however, I am working on developing fast writing habits as well. Mostly because it is fun to surprise people with speedy writing, and it’s always a benefit to be able to express oneself quickly through a written medium. Particularly when emails are the main form of communication!

When practicing and honing a craft of any kind, make it a goal to always be improving. Don’t compare yourself to others, instead look at where you were a year ago and make it your goal to grow beyond that point. You, yourself, are your biggest competitor.

When I look at my writing from a year ago, in fiction, I now see some stilted writing and contrived scenes. But, when I look at my recent writing I see scenes and writing that is more natural and convincing. My skills will continue to improve, and by next year I will probably have something else that I will have improved on, but at this point – I can see that I am still growing. Which should be one’s goal.

Lesson Five from a Year of Writing:

No matter how well laid one’s plans are, circumstances, interests, and tiredness can all make them go awry. An eleven hour flight may be the perfect time to write, but if one is tired, distracted, or just mentally out of it, the writing is not going to happen. Reading might, but writing certainly won’t.

In these cases, make new plans. If you can’t write, do research! Talk to people. Airports are awesome places to get into interesting conversations. Think about how people are talking, accents, and other habits, how they walk and move, or wait in line. All of these things can provide a wealth of “research” for later writing.

Finally, I learned to not be afraid to take time to recharge. After writing a lot, every day for a month, I needed time to recharge my fiction battery. Non-fiction is way easier to write, and I don’t get burned out writing it as easily as I do for writing fiction. My favorite ways to recharge include reading old favorites, reading one or two new stories in my genre, and watching high quality movies. All of these media levels can be analyzed, studied, and just enjoyed, to help hone one’s writing craft.

Choose your write-out. I found that, if I write fiction first, then I can continue and write non-fiction. However, if I wrote non-fiction first, I would no longer have the mental energy to write the fiction. I don’t know why, but that is how I write.

What Will Next Year Bring for Sarahdalzielmedia?

My goals are already laid for 2016. The Prophet’s Fire, and The Prophet’s Recompense are both nearing the time to write the final scenes, and enter the editing stage. Both novels are over 70,000 words, and Recompense bids fair to hit 100k before “The End.” I am aiming to have The Prophet’s Fire out in Kindle and Print by the End of February at the latest.

This new year will also bring plenty of blogging, special email newsletters, and on-the-ground full-time writing. Hence, I will likely be writing several blog articles on time management, and finding time for writing.

Also, I will be completing the “University to Ministry” blog article series, and adding information to the blog articles to form a non-fiction book. Some of the bonuses will be a special chapter on adapting to different cultures, living internationally, and finding time for your growth in full-time ministry.

So, if you want to stick around for another fun and crazy year here on SarahDalzielMedia.com, I welcome you along for the ride. There will be books, writing, and on-the-ground learning and advice all year long.

What are you looking forward to in this coming year? Leave a comment, I enjoy hearing from you!