This is a great space for an announcement or special offer.
You are here: Home / Writing Behind The Scenes / The Prophet’s Fire: Progress Update

If you’ve seen, or read, The Prophet’s Shield,  you may be wondering “how long does it take to write a book anyway?” Well, in all honesty, the writing is not that bad. It’s the editing that takes forever! The Prophet’s Fire is currently under going its’ sixth edit. Yep, six edits and it will need a seventh before publishing.

Writing a book is like warping a loom and choosing the colors for the weft. You know what it’s supposed to look like, but at this point, if the tension releases, it’s one step away from being a complete tangled mess. Well, most of the time the characters feel like they are in a tangled mess. That’s the idea of conflict in a plot. 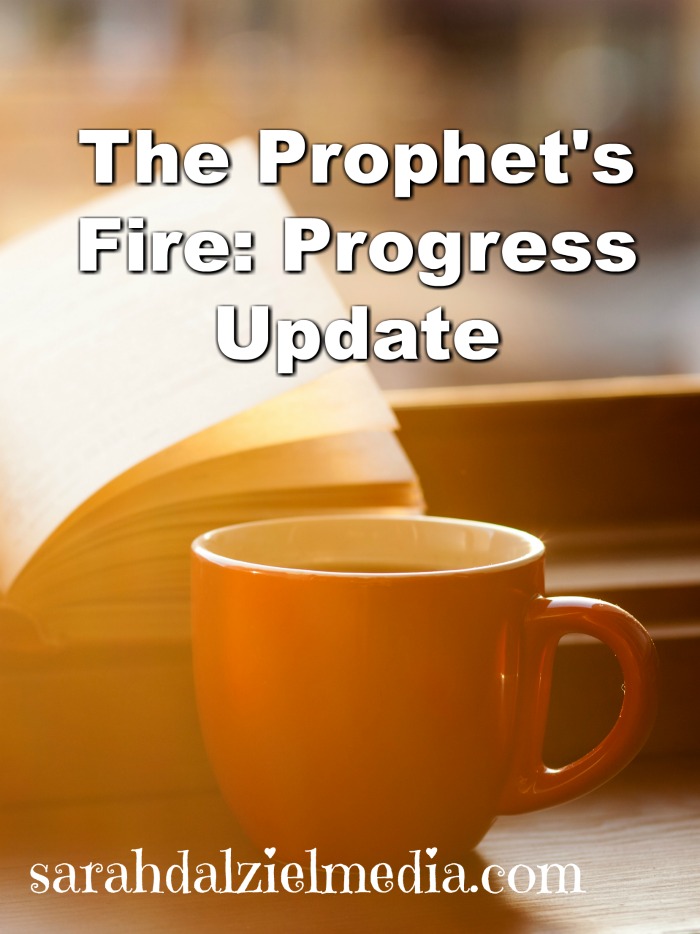 What Goes Into Editing?

For The Prophet’s Fire, the first edit was a developmental edit. This reviewed the plot, the characters, and the plot and character arcs. It looked at the question of if the main character had enough ‘skin in the game’ – was there enough at stake? Were the support characters believable, did they have flaws, stories of their own, where they sympathetic?

Some characters had to get a complete re-write. Others had to have conversations added, or adjusted, to be believable. The timeline needed adjusting, it was originally too short, which means scenes had to be added and woven in.

The second edit was a continental edit – looking at the question of if everything flowed. Once at this stage, I could pass off the book to my first tier of beta-readers. After getting outside feedback, I rewrote more scenes, adjusted character arcs, and worked to make things more believable.

Once this second edit was finished, it was time to have fun. The first printed edit. This required a draft back cover, and a draft front cover. I’m not satisfied with my current draft covers, so those will still need to be adjusted for the third print-edit.

Editing from a Printed Copy:

It is fun, in that you have a printed version of your book in your hands. But, it’s hard. For The Prophet’s Fire, it is harder than The Prophet’s Shield as I’m being more careful, more deliberate, and doing my best to be more thorough with these edits.

The print edits are also focused on the micro details more-so than on the macro ones. I’m changing commas and periods, adjusting dialogue terms, dropping word-padding, and sharpening dialogue and action. Or, at least those are what I’m trying to do. Sometimes writers have more of a challenge than they’d like to admit with making sure things are concise and clear. We love words. Lots of words. The more words the better!

Being back in Canada, with a much quicker turn-around for getting proofs. So, I have good hopes that the finalizing process, after this edit is finished, will be quick. I can’t put an exact date, but I hope March will be the latest that I announce that it is finished.

Of course, after The Prophet’s Fire is done, the third book will take editing priority. The Prophet’s Recompense is fully written, and waiting for me to have the ability to focus edit it. Which won’t happen until Fire is no longer taking my brain power!

The Fourth book, The Prophet’s Legacy is also in the works. But, like Recompense, it is taking a back seat until Fire is out, and until I am home and can once again focus on writing, editing, and researching like crazy.

If you haven’t checked out The Prophet’s Shield, you can get the first chapters when you sign up for my email newsletter. Newsletter subscribers will have first news of updates, publishing dates, and other opportunities.

Leave a comment, I’d love to hear from you!