This is a great space for an announcement or special offer.
You are here: Home / Writing Behind The Scenes / Book Reviews / Book Review: Jerusalem Vigil by Bodie and Brock Thoene

The books and series written by Bodie and Brock Thoene are among some of my all-time favorite Christian historical fiction reads. It was their Zion Chronicles, and Zion Covenant series that first ignited my love and passion for Israel. When I was in grade school I probably read The Zion Chronicles four or five times, and always found the story intense and engaging no matter how many times I read it. 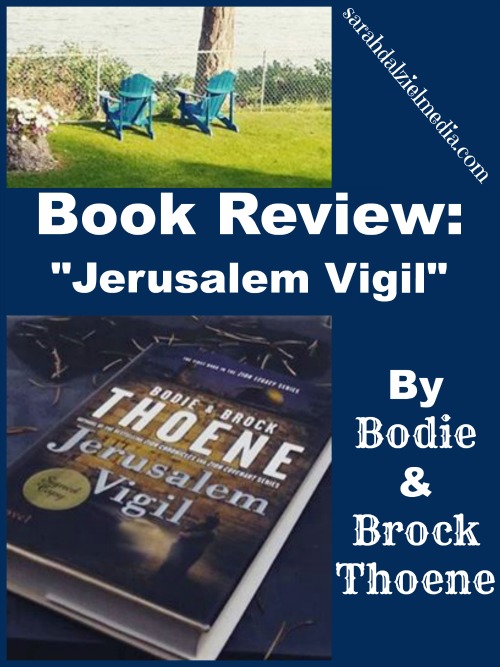 While I was in Israel these past few months, I went looking to see if some of Bodie and Brock’s books might be on Kindle. While I was browsing their work, I discovered The Zion Legacy series, and said “what! Books I haven’t read? And it deals with the War of Independence?” Well, that had me sold and I went and got hard-cover used copies of the entire series. Now that I am home and have access to the books, it took less than an afternoon to devour Jerusalem Vigil, the first book in The Zion Legacy series.

But, as I was reading Jerusalem Vigil I found that something different was happening than had happened when I read the other books. Now when I read of the Church of the Holy Sepulcher, and the towers and church steeple positions in the Old City, the markets in the Arab quarter, and the narrow streets and winding exposed ways in the Jewish quarter, or the desperate dashes through the graves and the contest around Zion Gate, it had become real. I saw Zion gate, with its battle marked stones. I saw the marks on Jaffa gate. When Bodie mentions standing at “the mill” and looking toward The Old City, I know that location and how close it is. I can imagine it without the bustle and growth of the city around it, how it might have looked to those desperate to reinforce the beleaguered forces within the Old City.

Suddenly, for me, this book was no longer merely a historical story. This book became alive and relevant. Those who were merely ten year old children in 1948, can still be found living in Israel today. Holocaust survivors, and war of Independence witnesses can still share their eyewitness testimony of these things. These books have become so much more than history, having seen those very places, the story becomes even more real.

While in Israel I learned more about The War of Independence, and as I was reading Jerusalem Vigil I found that it is amazingly historically accurate. The story of the war is compellingly interwoven through the lives it impacted and shaped. There is no sugar-coating the darkness and depravity that surrounded the fledgling state, nor the desperateness of their battle positions.

Before reading Zion Legacy series however, I would highly recommend that you read The Zion Covenant and The Zion Chronicles first. Characters from both those books make a strong reappearance in The Zion Legacy. This means that The Zion Legacy also helps answer the question of “what happened to them.”

Rachel and Moshe Sachar are back, as well as Ehud and Dov “the bear of Warsaw” with Rachel’s grandfather and brother also weaving their way through the conflict. From The Zion Covenant, we have Alfie, Leslie, and Joseph returning to the fore and joining in the struggle for Jerusalem. While having well-known and loved characters is a strong draw for this story. The fact that The Zion Legacy deals with the most intense and desperate struggle in the history of the State of Israel, is also a strong recommendation.

In fact, hardly had I finished reading the story when it was snagged by another family member to start reading! My biggest struggle is not losing most of the next week to reading the rest of the series in one massive binge-read, which is a very real danger as these stories are completely awesome.

This first book covers only the first three or four days of the War of Independence, which was a yearlong struggle. At the start of this war, there was no regular army and only the militia who had previously been struggling with the British, with the most organized of the militia being the Haganah which fighters later became the core of the Israel Defense Forces.

One benefit of The Zion Legacy being a historical fiction story is that we know Israel won, because Israel still exists today. The one thing that this story really brought home for me was that, if God had not been fighting for Israel then Israel would never have survived the 1948 war. Man’s strength could never have brought a handful of untrained Jews, newly come out of the ashes of the Holocaust, and enabled them to stand against better trained and equipped Arab irregulars. From man’s perspective, the declaration of Israel’s independence was a death notice, and yet instead of death, this declaration brought life.

The only challenge with Jerusalem Vigil, which anyone who has read Bodie and Brock’s books will be familiar with, is that there are a lot of different points of view which can be a struggle to understand when you first start reading. After the first two or three point-of-view switches the view points are established and  it is easy to keep track of the developing story. I find the view point switches are only awkward when I’m first getting back into Bodie and Brock’s books after an absence. In this case it was an absence of nearly 6 years, and am I glad to be back!

There does not seem to be a current hardcover edition of Jerusalem Vigil, The Zion Legacy Series, but there are plenty of used  hard-cover options available on Amazon. I got a used hardcover, that was author signed! So that is some added awesomeness from the used-book side of things.

What was your favorite book by Bodie and Brock Theone, if you’ve read their work? If you haven’t, what book would you be likely to start with?

Also, have you ever read about the history of the founding of the Jewish State of Israel? If you do not know much about the struggle leading up to 1948, I would highly recommend Bodie and Brock’s The Zion Covenant and The Zion Chronicles series, since they are amazingly historically accurate and provide an exceptional view of the Holocaust and the struggle for re-establishing the Jewish homeland of Israel.

Previous Post: « Writing for Ministry: Working how you Work
Next Post: Public Speaking with Confidence: Being Clear without Fear »