This is a great space for an announcement or special offer.
You are here: Home / Writing Behind The Scenes / Book Reviews / Theft of Swords: A Fantasy Book Review

Browsing the local public library about a week ago, after dropping off a print copy of The Prophet’s Shield, a fantasy book caught my eye. “Theft of Swords” by Michael J. Sullivan, its yellow cover and action-implying picture nearly shouted “this is interesting, read me!” Now, several times, I have picked up a fantasy book and found that it did not live up to the promise of its cover. Not so “Theft of Swords.” If anything, its cover belies the engaging mystery of the story itself.

Now, the back cover did help engage my curiosity about this book. Particularly the bolded plot summary lines at the top of the back cover. “They killed the king. They pinned it on two men. They choose poorly.” Once you read past the false accusation part, the rest of this amazing story shows why “they” choose poorly.

Overview of “Theft of Swords”

Picking up the book, in the library, showed one interesting thing. “Theft of Swords” is a very long book. But, that’s because it’s actually two! This means you get double the fun, for half the procurement hassle. Both books deal with stealing swords, hence the over-all title. 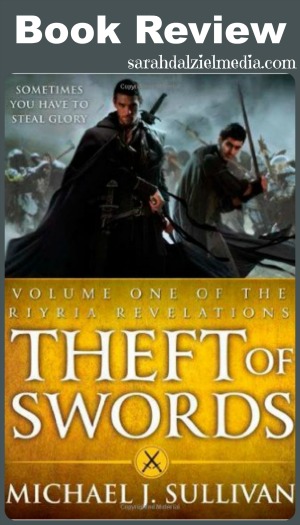 The first sword theft is where the two thieves get framed for the murder of the king. This happening opens a whole new can of adventuresome worms. The second sword theft opens the door to the happenings of the next book, and the possibility of one of the thieves, Hadrian, being more than he seems. Though, Hadrian’s sword skill already proves some of that.

While I would give this book five stars, based on Amazon’s ranking. I did have a few challenges when I was first getting into the book. The first few chapters, of book one, have several sentences that could use commas (they required me to re-read them to figure out what was being said). Also, there are one or two spots where the exposition could have been shortened. However, after chapter five I was no longer noticing any of those types of issues. Either due to them being absent, or due to my becoming completely engaged in the story.

The framing for the theft of the first sword had me laughing, though I think it should have been a more serious scene. The name that the guy, who arranged the sword theft, gave was “Delano DeWitt.” I have no idea why, but that name told me immediately that it was a false name – and I was laughing my head off over it. The author also uses several recognizable place names, like “Ghent” for some of his cities – which can be a little funny as well.

One of the things that I really like in “Theft of Swords” is the foreshadowing. It is not obvious, or blatant, but if you keep your eyes open you will notice several small indicators of what may well be happening in future books. There is also an interesting level of justice and fairness coming through, specifically from the thieves. Though, the religious construct appears to be trending to become the complete and utterly corrupted villain for book two and three.

I think that there is a saying that “absolute power corrupts absolutely” and I suspect that is what is happening with the story’s religious construct.

Further, this is an epic fantasy dealing with epic challenges, fights, and quests. It is fascinating, engaging, and nearly impossible to put down. The scope of the story reminds me a little of other sweeping fantasy epics, like Tolkien’s Lord of the Rings, though this story has more craziness and crazy fun sword fights.

Note: This is story contains a large amount of violence, fights, some bloodshed, and magic. However, it is still clean fantasy. There is very little swearing, and only with cause, and there is no sex. Technically, it is not a Christian Fantasy, so no allegory and it deals with a pantheon of gods. However, it is still an awesome read.

Final Thoughts on Theft of Swords:

If you want to be kept up for several evenings reading, I would highly recommend this book. It is two stories, so if you have some self-control you may be able to enjoy it over a week or two. If you are like me, however, it is likely to be completely read in about three evenings or less.

Tomorrow, I will be taking “Theft of Swords” back to the library and hopefully returning home with “Rise of Empire” book two in this fascinating series. I also noticed, on Amazon, that there are a few books dealing with the backstory of the two thieves. Books that are now on my “request” list for the public library.

Guess my reading schedule is booked for the next few weeks…

What type of fantasy to you most enjoy reading? Do you enjoy epic fantasy, such as this series or Tolkien, or do you prefer small or shorter works?